So, I am loving that my fridge has a supply of fresh mango for eating. I’ve been taking bits out to eat just like I would have done with chips or crackers. I don’t think I can get enough mango. Which is unfortunate when after going nuts that one store has mangoes for $1 another store has them for .59 cents! Well. Now I have four more mangoes, in case the others break down. They will all be eaten though, rest assured. 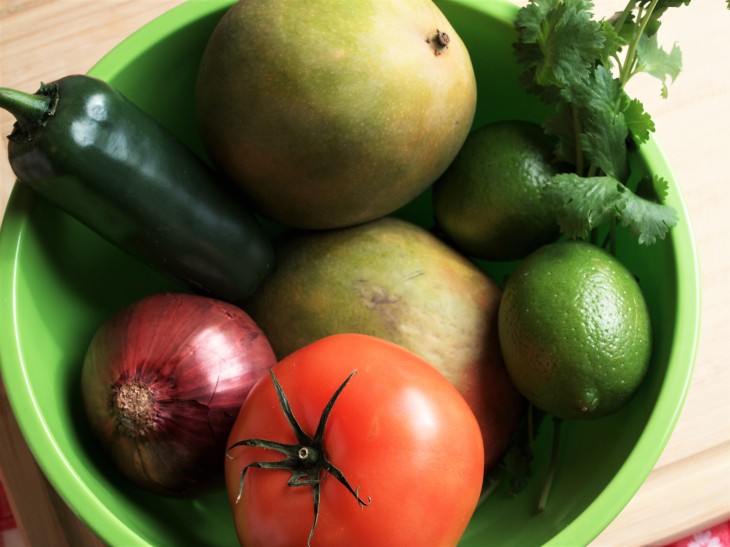 I found this on The Wandering Gypsy website and want to give kudos to the author’s tasty recipe. I have never really made any kind of salsa before but I was pumped to not have to do any cooking. I like to meal prep on my Tuesdays and I’ll make lunches for the rest of the week for me and Robby. After cooking a mammoth batch of food I was relieved to just slice some produce up and eat it with chips. This would make an awesome after work snack, maybe pair it with a nice drink.

Getting the good stuff out of the mango is such a breeze too that it was no big deal to make smaller cuts while everything was still attached to the skin. I wish every fruit was like this where you just make a few slices and you get instant bite size bits to snack on.

I needed smaller cubes this time around so I made the cuts closer together and when it came time to scoop it out, I made two passes. The first pass cuts them into smaller pieces and the second one gets the remaining mango holding on. You can see in the picture how little you can make them or how big depending on preference.

The only pain in the butt thing about mangoes is the seed. Everyone talked about how awful the seed is and they weren’t kidding. After slicing my third mango ever though I was getting frustrated at how much of the edible stuff I was losing just to avoid the seed. I had to dig deeper. 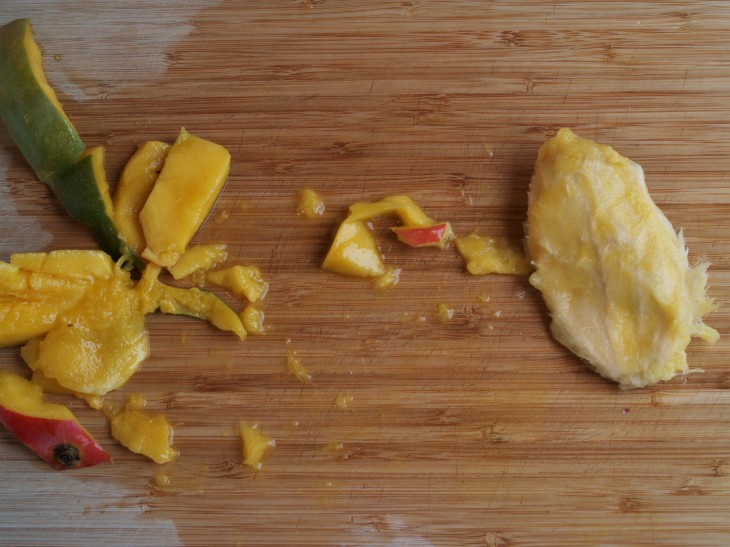 That’s almost a cup of mango right there! It would be painstakingly possible to peel off the good bits from the skin but just not worth it. That seed is ginormous though. 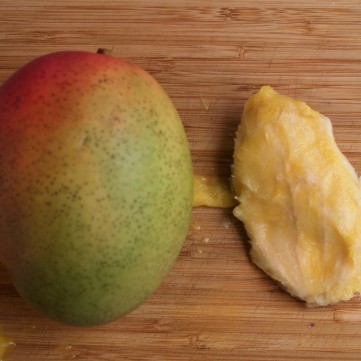 Look at how big the seed is compared to a full mango about the same size! I’m not even going to tell you about how much I had to scrape off that didn’t make it to the picture. I guess I’m just being cheap and greedy, I just want the most out of my buck. I’ll get over it though.

After I spent too much time scraping slime off a seed just to see what it looked like I chopped up the rest and finally got some salsa on chips. First bite had a little bit of jalapeno and was surprisingly spicy so I added a little bit more mango (because that is what I’m here for mainly) and it was awesome. I wasn’t really sure what to expect truthfully, I’ve eaten fresh salsa before and it was mostly tomato and cilantro. This was sweet with a dash of saltiness that I am all about.

It may still be winter but this really made me think of summer. I definitely would make sure you put this on a cracker or chip when eating, it isn’t really an eat alone kind of thing. The onion wasn’t too overpowering, which was also a concern when making it. I would never think of putting a strong onion beside a tender sweet mango but it actually worked nicely together.

Y’all go out and get those mango deals so you can make this salsa!