I’m starting simple first because apparently boky choy (yes, boky choy is baby bok choy but not really because I just made it up) is great in a stir fry. Everyone has done a stir fry whether or not they realize it which is neat but it is basically some kind of protein mixed with veggies (or can be all veggie!) tossed in hot oil in a skillet and usually mixed with some sort of sauce. Stir fry was definitely the number one option when it came to looking for recipes but I don’t have time to get all those things together and have a high risk of not liking it and just having this huge mess of food I won’t eat later. I’m not about that life.

The second most popular option while searching seemed to be a delicious garlic mess with shallots and it all gets thrown into a skillet by itself and sauteed. I had no shallots so I threw in green onions because of course I did.

Ever since Whole30 came and pass I’ve found myself keeping bulbs of garlic around more often when I used to dip them out of a jar already minced. I recommend using fresh at every single chance you get for garlic because it just smells heavenly when you cook it.

I know I usually roast, sauté, or grill things as they are and that can be sometimes seem fairly repetitive but these are the things we must do to get the flavor of the vegetable to stand out. So of course smothering this in garlic totally doesn’t mask the subtle flavors of baby bok choy. 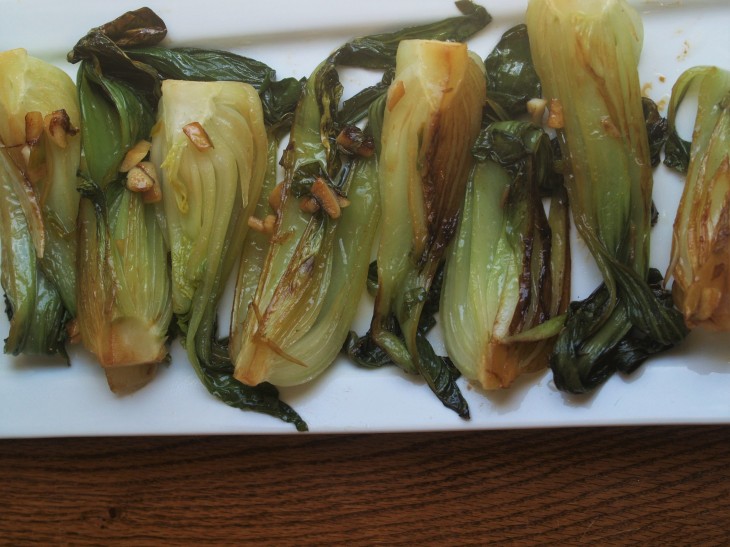 I mixed in some soy sauce with these as well to at least make it seem like a stir fry accompaniment. I have to say it gave the bok choy a nice flavor and with the garlic it just really set it off.

I know I just defended my choice to sauté but I have to admit that I have noticed a slight trend when it comes to sautéed, grilled or roasted vegetables, particularly ones that have a stalk and leafy component. The texture is usually a slight crunch with the stalk albeit a little soft, but the leafy parts have yet to wow me. Bok choy is probably my favorite in the sauté category so far but only compared to what I have had so far.

With that being said we march onward to try and jazz up baby bok choy and maybe get to the bottom of its popularity. That or we’ll just keep eating things. Let’s go with the latter.