Don’t come after me now, I know when I chose eggplant in the 35th week it was slightly controversial, but here we are eating the 45th pick of the year and it is Chinese eggplant. I felt I was pretty fair when I lumped two different papayas together and even two different persimmons together. I was able to purchase those at the same place though since they offered both varieties. 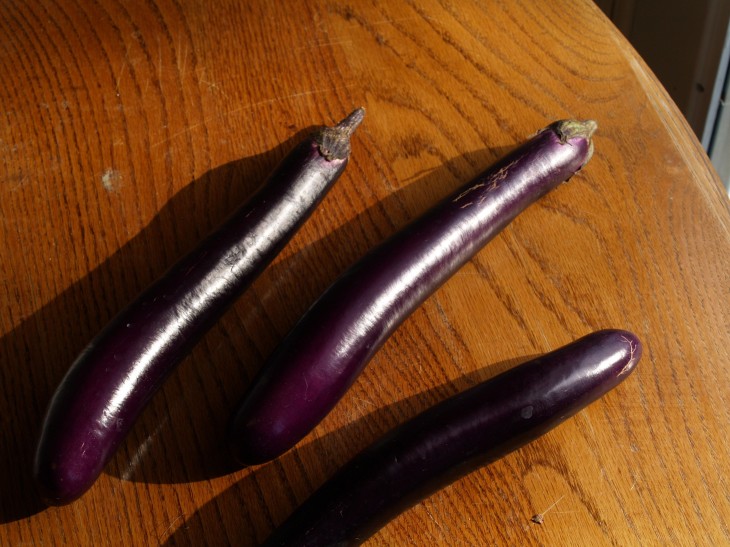 Going back to my persimmon/papaya argument, using different types of the same fruit isn’t as big of a deal as using two different types of vegetables. I mean, neither are really the end of the world if you substitute one for the other, but I’m sticking to my guns and just let me count this one because it is unique. 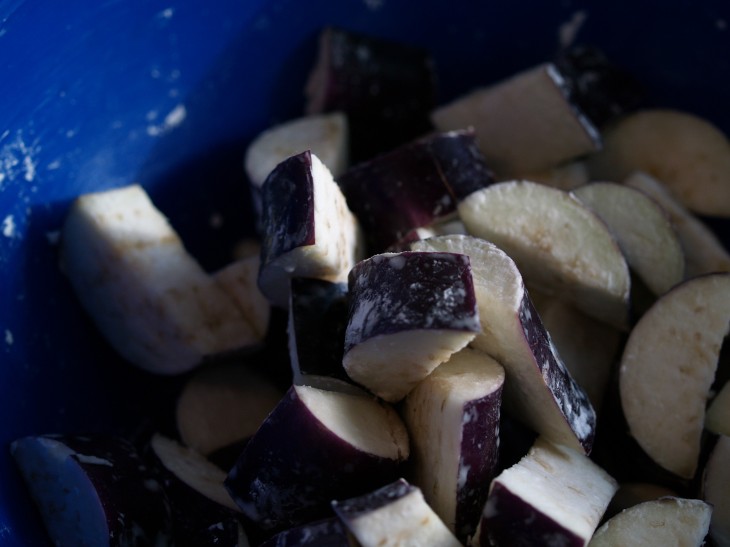 This variety of eggplant is also supposedly sweeter than the bigger kind and doesn’t require a salt bath before cooking which is awesome because that is a step I always tend to overlook and get mad when I see it pop up in the instructions. 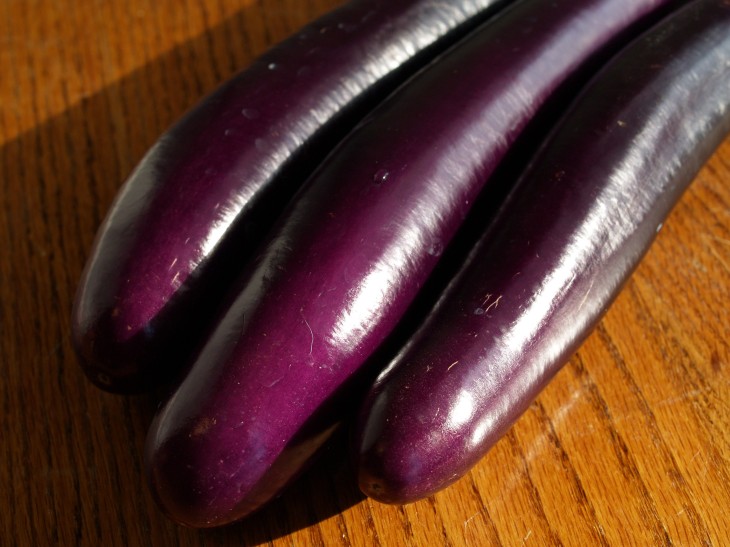 These purple bad boys still have the feel of a regular eggplant, like its got wet styrofoam in the middle and the skin is a little tough. The insides also contain seeds but they aren’t as big and you can’t detect them which is another fun thing about them. It’s all the good stuff of eggplant without all the bad. Chinese eggplant stands on its own and I am going to venture to say the preferred eggplant to use. 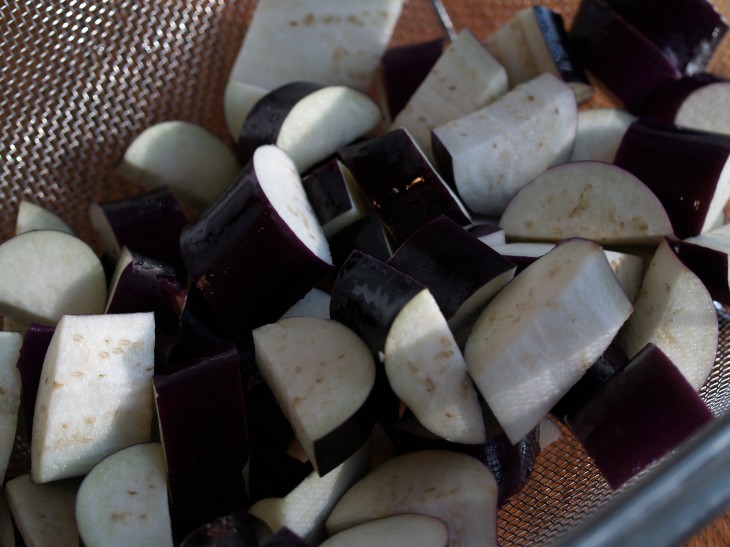 Oh man, I almost forgot to give credit where credit is due. I got the recipe from the omnivorescookbook.com and you should go poke around the site and see what you can find. (Side note, still a vegetarian, just looking wherever I can to find a recipe).

I’ve also discovered the joys of corn starch. A while back I found out some blocks of tofu marked down to 99 cents so I loaded up on them and froze a few. You take one out, thaw, press, and coat in corn starch then put in a skillet and you have some delicious crunchy tofu nuggets. 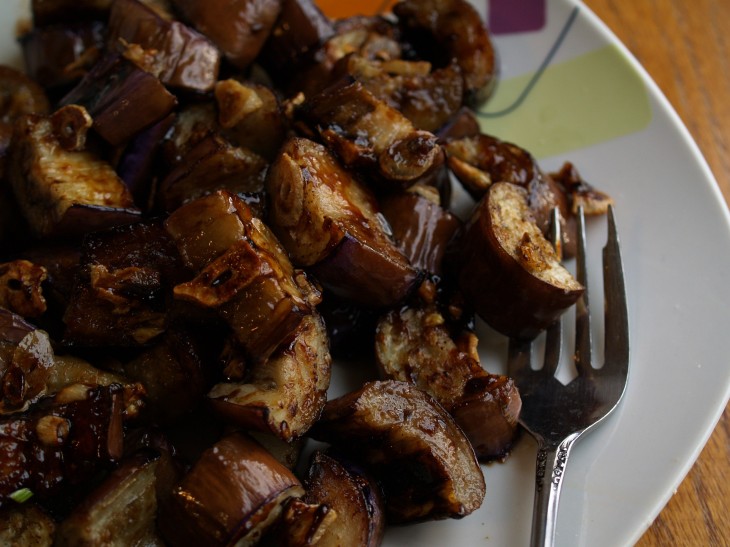 This garlicky pile of eggplant is absolutely worth going out to buy Chinese eggplant. It has a meaty texture but that pleasant garlic flavor as well as a little bit of ginger and soy sauce. I wish I had made rice, but I guess that’s why we have leftovers because it would be fantastic on top of a warm bowl of rice. 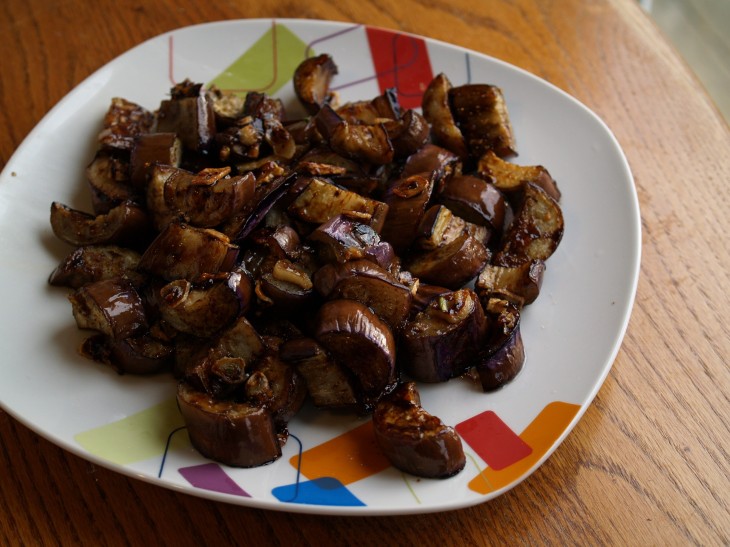 Wouldn’t you know it, I got Robby to actually try a piece of this! I offered him some persimmon which I thought would be an easy sell but he didn’t go for it. I offered him this thinking he’d turn it down too but he was all for it. I think he liked the eggplant parmesan more than he let on, so it is all just a matter of introducing something to someone. 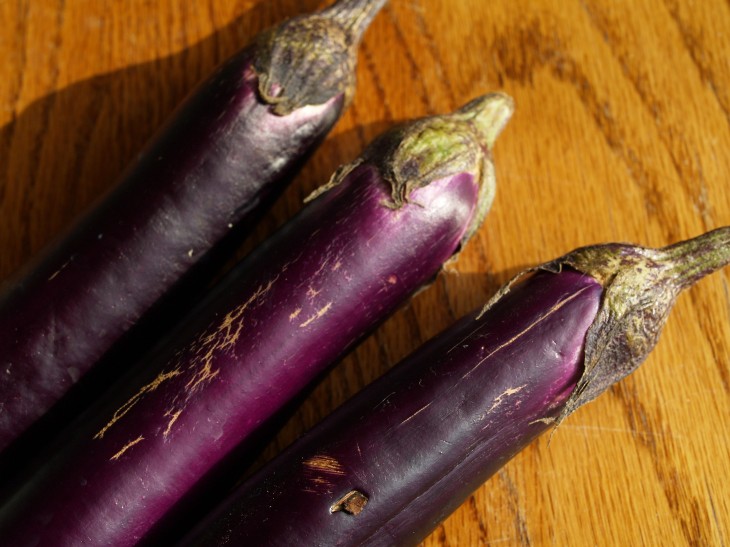 Actually, no, I am not done arguing why Chinese Eggplant gets its own spot on my list of new veggies. I have never eaten it, never cooked with it and certainly never thought about it. I’ve seen recipes, photos and walked past it in the store and thought, “it’s just eggplant.” But no. Chinese eggplant deserves a chance and you should try it instead of your regular ho-hum eggplant and see what you think. Easier to deal with, easier to cook and more chance for crispy skin is what you will find with this skinny piece of produce.

So, yes, Chinese eggplant deserves its own spot. Stir fry it with garlic like I did, or even make the garlic eggplant with it from my previous eggplant post. Make eggplant chips because they are the perfect size or make mini eggplant parmesan servings. I feel like the possibilities are more with Chinese eggplant.

Getting close to 52 y’all! Stay tuned!