Nope. Did not enjoy.

I think this was a combination of many things, but just nothing seemed to go right from the moment I bought this gourd.

For starters, this was labeled as “Thai okra” and I was hesitant to get it because I wondered if it was just a large version of okra, a veggie I have already covered. The store was closing soon though so I just went ahead and bought it.

When I was looking for recipes it became clear to me that the internet is ridiculous when it comes to looking for something that contains exactly “thai okra” because I just kept getting the regular looking okra recipes which I’ve already had to muddle through.

Finally I noticed that it also goes by another name, luffa, as in part of the loofah family.

Yep, I bought a sponge squash.

There are two types of luffa and that is the smooth and ridged and I obviously got the smooth because I couldn’t even drag the vegetable peeler down it. I’m not going to link the recipe I found, but I am ridiculously certain it was only one of seven on the whole internet where ingredients are easy to come by and isn’t frying. I don’t want the person who wrote it though to think I am bashing their recipe because I may have messed up or it might have just been not my thing so I’m not putting that bad vibe out there. 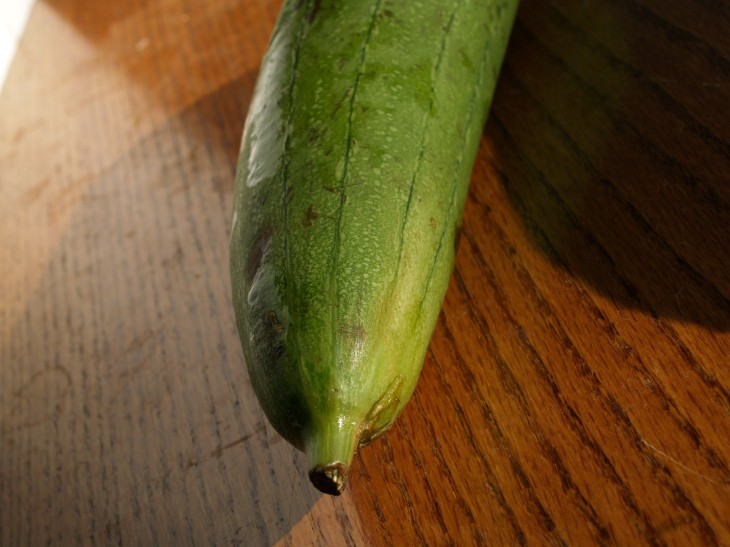 Anyway, my instructions were to combine bell pepper, an onion, the luffa and my choice of spices and that would be that. It wasn’t super specific but was more like a menu board where you build your own salad except you build your own recipe with luffa as the center.

When I peeled it, it felt like a dry cucumber if that makes any sense to you. You can see above the seeds are kind of like cucumber or squash seeds where they aren’t tough but soft and can be eaten. So when the next step called for removing the seeds I just didn’t because I was worried I would end up with maybe a handful of luffa to work with. The squash from squash week were different in that the outside was tough and could withstand me scraping a spoon down the middle. When I peeled the one the peeler wouldn’t latch onto, you would have thought I was peeling with an ax it was so soft.

I got my stomach and mouth ready for a zucchini experience. I love zucchini and yellow squash with onions and a bit of oil or butter. I added some five spice to the mix and let it simmer in some water (again, the recipe had like five options so I just picked the ones I had on hand, the liquid option had coconut milk listed but I’m glad I didn’t waste a can of it on this).

It turned into mush. It was just mush and the texture was mush and the taste was mush. I took one bite, couldn’t get it down and promptly spit it in the trash along with the bowl which is a major shame because I loathe wasting food. I just could not get past the nasty texture of it. I’m usually ok with some weird textures too so I was surprised that I couldn’t get past the feeling, but it just reminded me of slime and it was the least appetizing thing in the world in that moment and it was in my mouth. No thank you.

I’m hoping this will be the last disliked food of the year though (for this blog at least). I hate that number 47 was a disappointment but here is looking at the next five.